Have you ever felt like you've been in transit all day? We left G&M's at 8am to go to Gatwick. We got there at about 10, & our flight was scheduled for 11:45. By the time we were checked in it was time to go through security.

I usually leave Asher's drink in the diaper bag simply b/c it's easier. There's enough other stuff that we have to do that I don't mind them having to check it after wards as it gives us a chance to get all our shoes on, the laptop put away, Asher in the stroller, & all our bags situated again. Well, the lady had to do a swipe of the bag w/ her little kleenex thing & then check the cloth in the scanner. When she did so, the scanner beeped & printed out a little report so she had to call over her supervisor who then had to question us & she had to re-swipe the bag. The second time it didn't go off, however I had noticed while she was waiting to check the bag that her cloth thing was already quite dirty, so I think it was from someone else's stuff, but it didn't really matter anyway.

I did find it quite humorous however that the supervisor's first question was “who does this bag belong to?” Well, truthfully Chad & I answered that it was Asher's, so the man said to Asher, “well young man, you have some questions to answer here,” before he actually began to question Chad.

Once we were through security we began to look for a place to get some food, but the only places in the area were travel items, clothing, Harrod's, cosmetics & alcohol, so we decided to head toward our gate figuring we'd find something out there. Costa Coffee was the only thing to be found, so we settled for a few muffins & smoothies.

They began boarding our plane about 10 minutes after we had finished eating, so we really didn't have much time to let Asher run around before we got on the flight, but it couldn't be helped. Once we were on board we discovered we were in row 4, just one row behind first class. I wasn't sure it was a great place to be sitting, but it worked out ok. Our luggage had to all be put up top, which was kind of annoying, but the people behind us didn't have anything under the seats, so we could shove our shoes under the seats & it also gave Asher more room to muck about.

It took about 10 minutes for Asher to fall asleep & he slept for over 2 hours. It gave Chad time to sleep & I had a chance to watch "The Bucket List." I was quite glad that I didn't have to pay for it since I didn't find it to be that great of a movie. Out of a 7+ hour flight that was the only bit that Asher slept for, but he was pretty well behaved, so we didn't mind too much.

When we got to Toronto, we called the hotel that we had parked at, so they could send a shuttle to get us. Once we were at the hotel they told me they said we had no reservation, so I showed her my confirmation paper, & she asked if it had been confirmed when we had arrived. I said yes, & she then told me that nothing had been booked, but she booked us in, so it was ok. She was in a bit of a snarky mood I had noticed. The man behind me asked her something & she directed him to the lifts. He turned & didn't see them, so he asked her where they were. Her response was, “the brown things right behind you.”

We got settled in our room & then went to find a place to eat even though it was only 4pm local time, it was 9pm London time. We didn't find much at first, it seemed we were in a bit of an industrial area, but then we saw a billboard for Denny's, so we went there for dinner. When we pulled up to the restaurant I enthusiastically told Asher we were going to Denny's b/c there was a McDonald's right across the parking lot. Asher fell for it! He noticed the McDonald's, but wasn't overly upset that we weren't eating there. 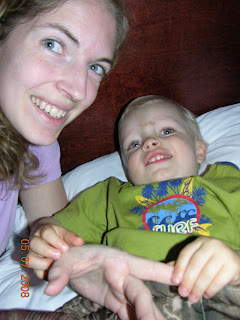 After dinner we went back to the hotel for the promised swimming! I had been looking forward to that since I booked the hotel. Asher wasn't quite sure about the big pool, he got as far as the 2nd step & wasn't sure he wanted to go any further. Perhaps having a Rubbermaid container for a bathtub is giving him a fear of big water. But once we started having him jump into the water to Chad he was ok. 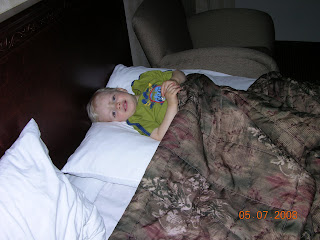 Next on the agenda was a bath for me, since it is a luxury I seldom get these days. We got into the room to discover that the plug on the tub was broken! Arrrgh! I called the front desk & they said they'd send maintenance. I was pleasantly surprised to hear them knock a mere 10 minutes later. Chad figured they knew I was trying to have a bath right then, so they sent him quickly. I had a very enjoyable soak in the tub. It's now 7pm & I'm off to bed!

Written by Sherilyn -Dominee Huisvrouw at 16:20:00