The End Is In Sight!

I've had a few people ask about what's been going on in our lives, so I figured it was time to post an update.  Life has been a bit hectic & chaotic to say the least.  Last weekend we moved out of the place we had been house-sitting since the owners were coming back home this week.  We were very fortunate to be able to stay there for nearly 3 months, & initially when we began our move we had figured by this time we would be moving into a house of our own.  However, the house we ended up buying had renters in it, & we needed to give them 2 months notice to vacate the premises.  Unfortunately, that left us with about 6 weeks with no place to live. We put out the word that we were looking for a place in the meantime, & through church connections we managed to find a 3 bedroom duplex to rent, & church people have donated furniture for us to use since our things are all in storage!

We are thankful that everything has worked out, but this time of transition has not been easy for the kids.  They are adjusting to a new school, new friends, new church, & their normal routine has gone out the window.  PChad & I are trying to maintain as much normalcy as we can, but there's always the occasional thing that comes up, & while it's not so difficult for us to deal with, the kids occasionally have little meltdowns.  I made the mistake of bringing the kids to the grocery store after school the other day, & they did not have as much time to play at home as they wanted, & dinner was a sad, sad time.  If you have seen the movie "Inside Out", you will understand that my kids wanted to lay on the floor like a blob, & just disappear.

I have been filling my days trying to do normal boring things like laundry & cooking, & also trying to do as much as I can to get things set up for our new house.  Making sure we have electricity & heat when we move in, so we don't actually need to lay on the floor like blobs under a pile of blankets just to stay warm.  (We did move into a house once in November & were without heat for a week, it was not fun).  Getting the vehicles inspected so they can be registered & insured.  Some of this stuff has to wait until we are in our new place so we have an address (you can't have a drivers' license without a home address on it).  I have started making a list of all the things I will be able to do once we have a permanent address again: library cards, Nexus cards, Provincial healthcare, Order new checks from the bank.  It will be so exciting!

So, we get our new house January 1, & all of our things come in the moving truck January 2.  The kids go back to school after Christmas on the 4th, & my parents are going to come up & help me to unpack all the boxes while the kids are in school.

Before we left PEI the kids were so excited for this move.  Asher was 2 years old & Chancery was 6 weeks when we came to PEI.  They kept saying, "This time when we move we'll remember it!"  I dare say they will never forget it!  At dinner the other night we were talking about how I had decided that I'd like to marry a farmer so I would never have to move, & then we were counting all the houses each of us had lived in, & how sometimes what we plan doesn't work out, but it's ok because God knows, & his plans are better.  For those of you who are curious, by the time we move into our house here...

The Butterfly Princess & The Robot

I realize I am nearly 2 weeks late with the kids' pictures of Halloween.  It's been a busy time.  My parents came to visit, my computer crashed, & it's been hectic around here!  Better late than never! 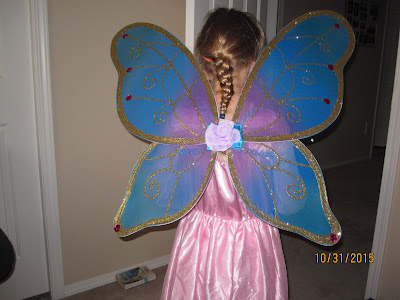 Chancery wanted her wings this way, but they kept bonking her in the head, so we snapped a picture, then turned them over. 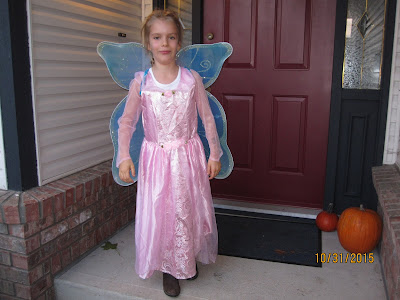 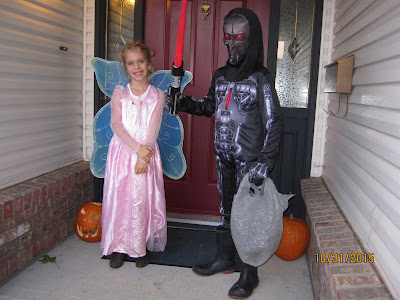 Asher decided to be a robot, but he also kept asking for a sword.  We compromised on a lightsaber.  Of course a robot walking in puddles would be an issue, so he wore rubber boots.  Pretty smart, eh?

The kids had a great time trick-or-treating.  They got more candy than they needed once again, but they were willing to share with PChad & I, so everyone was happy!
Written by Sherilyn -Dominee Huisvrouw at 11:26:00 No comments: Links