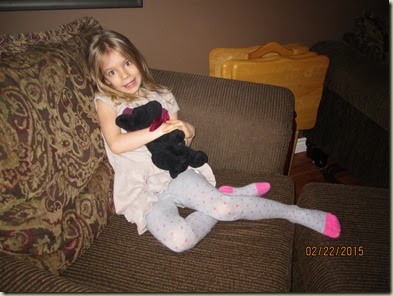 Chancery: “You might be asking, ‘Is Asher sick today?’.” 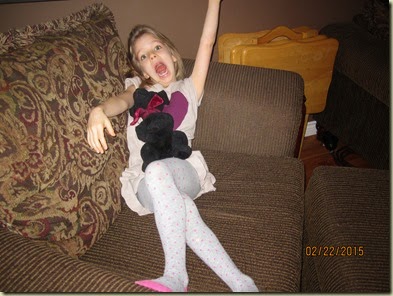 Chancery: “No, he’s just being grumpy!” 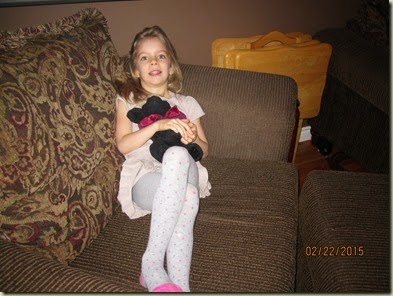 Chancery: “So Mummy said he didn’t have to be in the pictures if he didn’t want to be.” 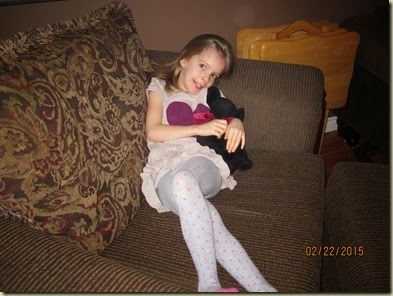 Chancery: “I don’t know why anyone would turn down pictures.  I adore them!”

Written by Sherilyn -Dominee Huisvrouw at 04:17:00 No comments: Links

We have had a lot of snow in the past 2 days… 70cm, (or 27.5”).  They pulled the plows off the roads yesterday at noon, & have already cancelled school & government offices for tomorrow.  Everyone headed outside for a bit this morning.  Chad was busy snow blowing the driveway, while the older boys worked on the back deck.  And while they were outside in the snow, the littles & I were inside defrosting the freezer, or playing with snow inside! 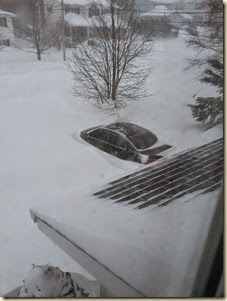 The car was a bit buried… 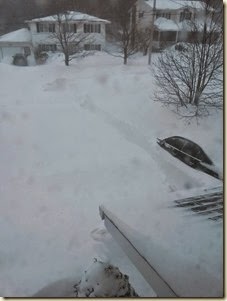 It took almost an hour to get one small path down to the road since the drifts are more than twice as high as the blower! 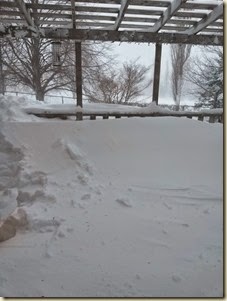 This was the back deck this morning… 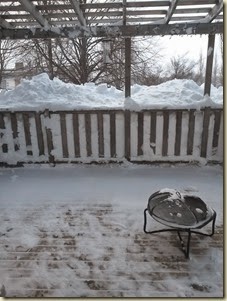 And after the boys got it all shovelled off.  Normally there’s a 4 foot drop to the ground off the deck, but the snow is currently 4 feet taller beside the deck (the poor bushes will be in rough shape when the spring comes!)

I got myself stuck in a drift up to my hip & had to crawl out.  Meanwhile Digby was trying to bite my gloves off thinking I was playing a silly game.  Asher got himself stuck in the snow under the lilac tree.  He was standing straight up, the snow was up to his armpits & he could not move.  I had to help dig him out, & he ended up losing a boot, so we had to dig his boot out too!

Monday is traditionally Dominoes Pizza night, but unfortunately due to the snow, they are closed!  Now we’ll probably starve.

Written by Sherilyn -Dominee Huisvrouw at 11:10:00 No comments: Links

Digby sleeps in PChad & my room, & often during the night Digby dreams.  He makes little ‘bruff, bruff’ sounds which are cute, but if they go on too long, can be annoying since they keep me from sleeping.  PChad has always been a hard sleeper, & is never really bothered by Digby’s dreams.

The other night Digby was having some loud dreams, & barking full on.  At breakfast PChad & I were telling the kids about his loud barking in the night, & Chancery asked, “Did you hear it too, Daddy?”

Chancery: “Wow! It must have been to wake you up!”

Written by Sherilyn -Dominee Huisvrouw at 08:50:00 No comments: Links Asher: “Mummy downloaded some new games onto my 3DS, & I am so excited about them!” 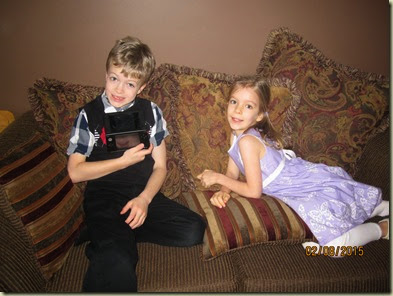 Asher: “She got me the old, old, Super Mario Land that was on GameBoys a long, long time ago.” 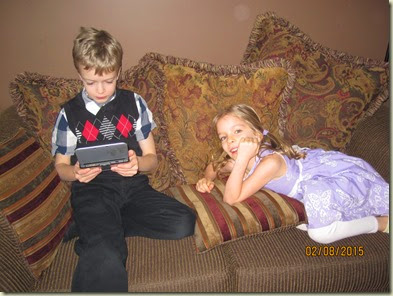 Chancery: “Do you suppose that if the games are that old, that Mummy is too?” 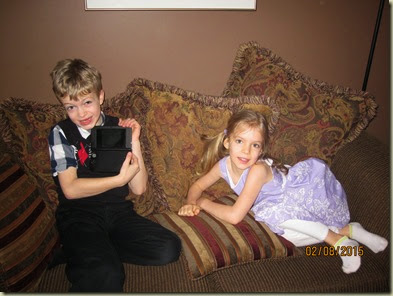 Asher: “I don’t know, but I’m also really excited about the Wario game she put on here!” 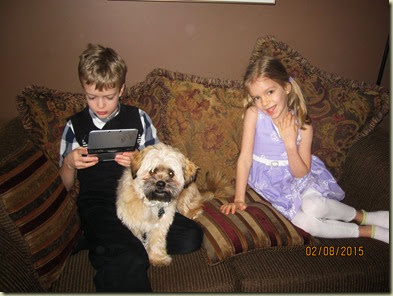 Chancery: “And if you are so busy playing your games, then you won’t mind if I go play with your train tracks, right, Asher?” 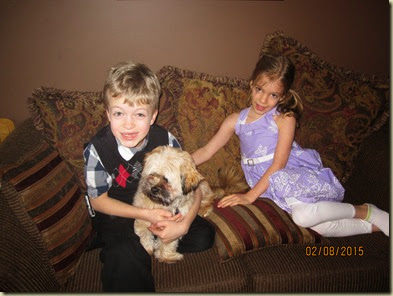 Asher: “Well, I shouldn’t play video games all day.  Perhaps we could go play trains together!” 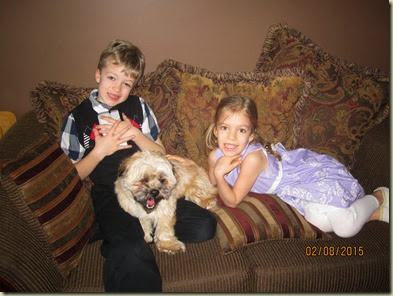 Written by Sherilyn -Dominee Huisvrouw at 04:44:00 No comments: Links 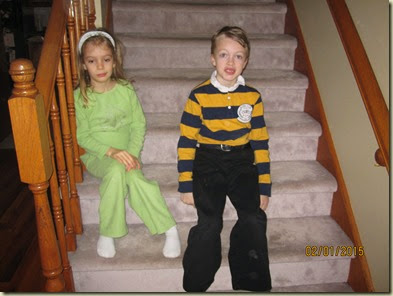 Chancery: “I am sick today, so I’m not coming to church.” 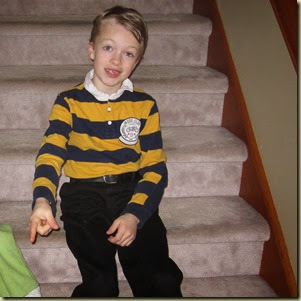 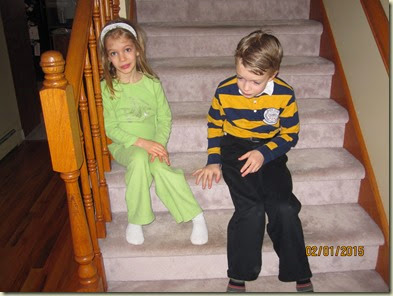 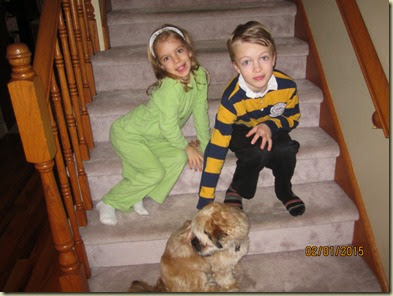 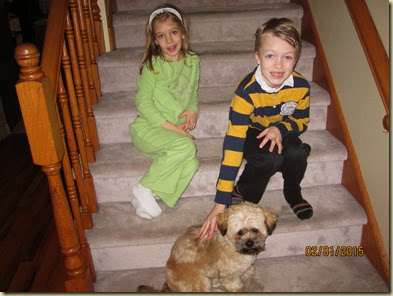 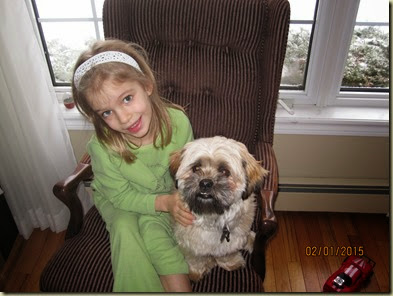 Chancery: “I love you, Digby!”

Written by Sherilyn -Dominee Huisvrouw at 04:33:00 No comments: Links