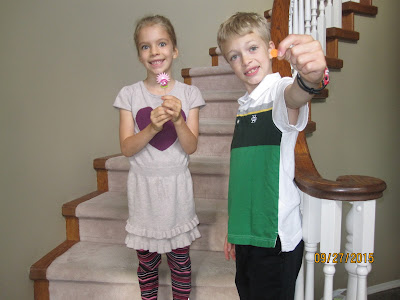 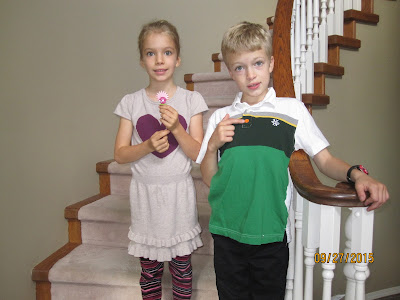 Asher: "...and I have placed it over the button on my shirt!" 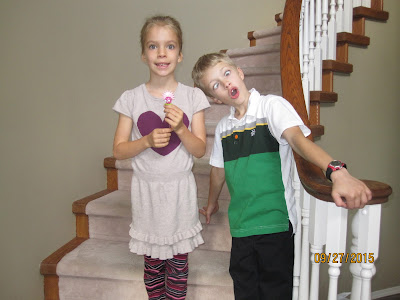 Chancery: "That's a strange thing to do, Asher!" 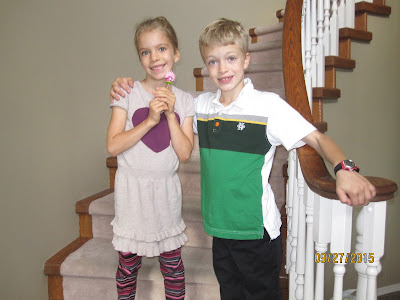 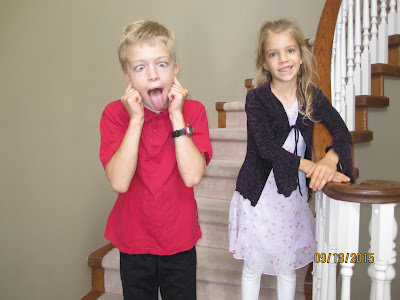 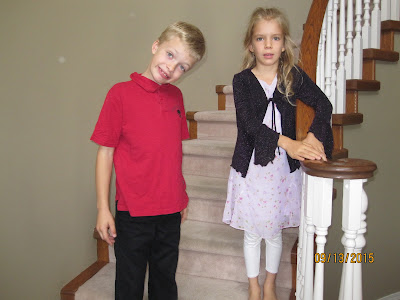 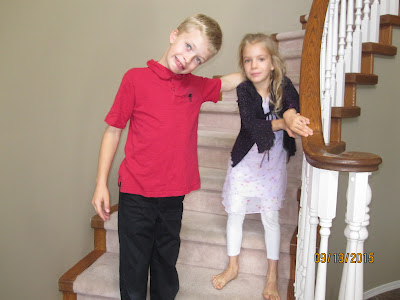 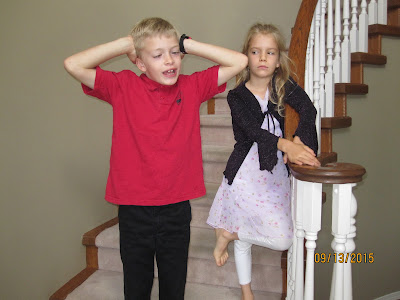 Chancery: "You do know these pictures will be around for a long time, right Asher?  People are going to be able to see these for many years!" 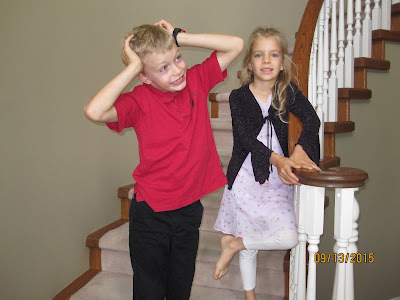 Asher: "And generations to come will think, Boy, that Asher sure is a funny guy!" 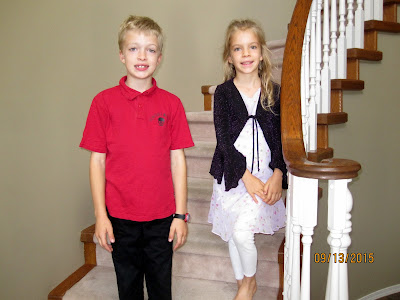 Chancery: "How about one nice picture, then I can go back to reading my book?"
Written by Sherilyn -Dominee Huisvrouw at 14:36:00 No comments: Links

Well, I did manage to get pictures of the kids on their first full day of school, though it was after school & not before, which probably ended up better since the sun would have been in their eyes in the morning! 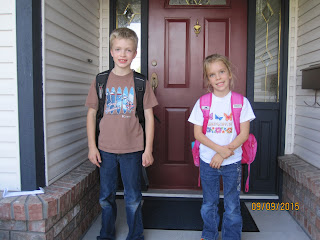 Coincidentally, both kids are wearing shirts from one of Grandma's trips.  We love these keepsakes, as they are useful (less clothes for us to buy), & after the kids outgrow them, they 'll be made into a quilt! 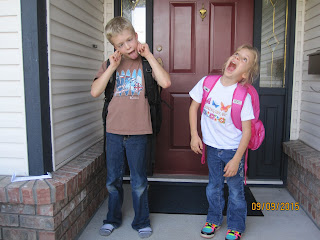 First Day in Another New School

Asher started grade 4 & Chancery started grade 2 today.  This is the third new school they have been to since starting Kindergarten, going from French Immersion, to French, to English again.  I'm a bit relieved to be able to understand all of the newsletters again!  I guess you could say all the changes in the past few years were just to make it not seem so strange for them to go to another new school (good planning, eh?), not that it was intentional, that's just the way it worked out.

It was a bit of a weird morning.  The kids only had a half day today, so they didn't need lunches.  Because of that I totally forgot about snacks!  Fortunately, they made new friends who were generous enough to share!  We were ready about an hour before we needed to leave the house, so we played games for awhile, & totally forgot to take first day of school pictures (tomorrow is the first full day, so we'll go with that... if I can remember)!

When we had gone to visit the school, the teachers had not decided where everyone would sit, so I asked the kids where their seats were after they came home...

Chancery: "I got to sit in my first favourite seat that I chose when I went to school the first time!"

Asher: "I got to choose, but a lot of the seats were already taken, so I got to sit in my fourth favourite seat.  The one that was all alone in the back row.  But then I made a friend, & I wanted to sit by him, so I moved my pupitre to beside him!"

I love that they are making friends already, & that Asher still thinks in French sometimes.  I hope he doesn't lose that now that mostly everything is English.  Although in grade 4, they start learning French at this school, so there is hope!

Written by Sherilyn -Dominee Huisvrouw at 16:13:00 No comments: Links 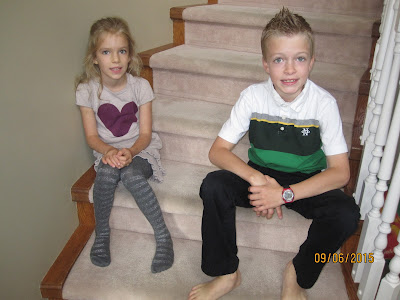 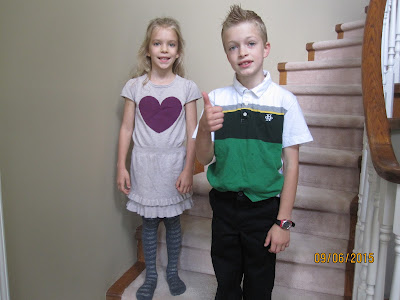 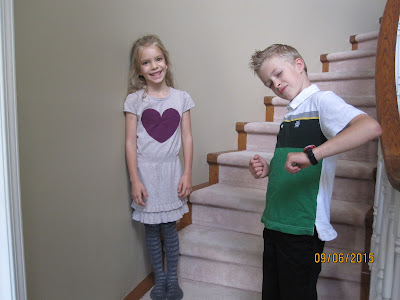 Chancery: "I'm excited about our new school too!" 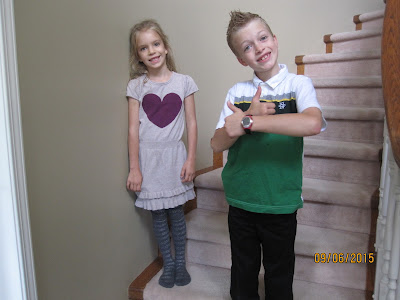 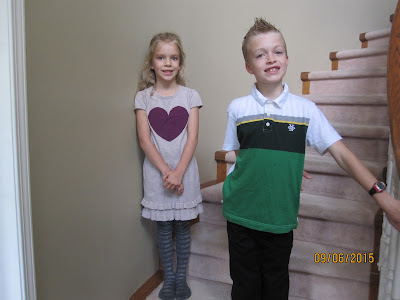 Asher: "Get ready, 'cause here we come!"
Written by Sherilyn -Dominee Huisvrouw at 09:29:00 No comments: Links

Final Day in the Van 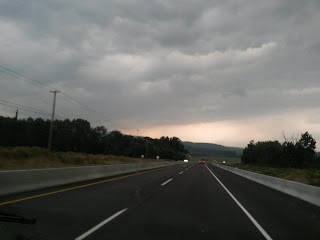 Our last day of driving took us right into smoke & clouds. It was wierdly dark at 11 in the morning. I told Asher at one point to look for forest fires (he was claiming to be bored), after an hour he asked, "Is it ok if I stop looking for fires now?" There was plenty of smoke, but no fires spotted!

I think Digby was getting bored of all the driving as well.  This is how he chose to sit for quite awhile, & if we moved him, he'd just readjust back to this position! 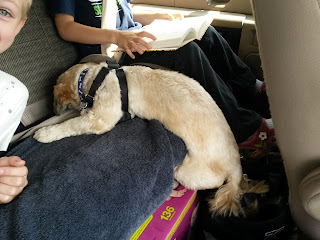 We made it to BC after 3 weeks of travel, & were welcomed by a giant wind storm which knocked the power out for 2 or more days.  Church was cancelled due to no electricity, but we have gotten power back, & have settled into the place we are staying.  PChad started his new job, the kids start school next week, & then it's time to look for a new house!
Written by Sherilyn -Dominee Huisvrouw at 06:00:00 No comments: Links