My friend Katie asked me the other day if I still had Ralph. Ralph is a stuffed dog that I got for my 5th birthday from a childhood friend. I was sick for my birthday, but this friend's mother dropped off a gift. Until a few years back I always thought of his name being "Ralf", maybe b/c I had spelling issues, but more probably b/c I had never encountered anyone actually named "Ralph" before.

There are some variances in the story of how he got his name, my mom thinks it was written on the tag, but I'm pretty sure I gave him the name myself b/c he looked like the dog on the Muppet Show. I only learned later that that dog's name was actually "Rowlf", which probably explains the spelling issue.

Sometimes Ralph decided he's like to play dress up, but since he was a boy he liked to do the minimum amount. He'd wear ribbons on his ears & tail (blue of course) & go by the name of "Lorene" (the name of an Aunt of mine that he apparently really liked).

Ralph was quite the inquisitive pup, he was always banging his nose on windows, counter tops, walls, floors, railings, you name it, he's sniffed it & has the marks on his nose to prove it!

My brother's always knew that if they really wanted to get to me all they had to do was mess w/ Ralph. Usually it was pretty tame, but once Brian got carried away & ripped one of Ralph's arms off. I think he was quite surprised, but Dr. Mom came to the rescue & sewed Ralph back up!

In Grade One, my friend Jason M happened to have the exact same dog, except that his had spots on it. I have never seen another dog quite like Ralph other than Jason's. In highschool Ralph became the Cross-Country team mascot. 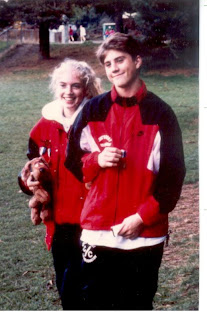 He came to all the races & was in all the team photos. 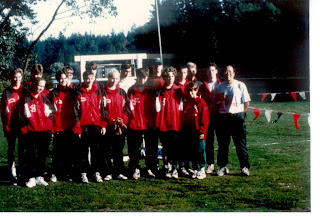 He even went to Mexico for a Mission's trip! 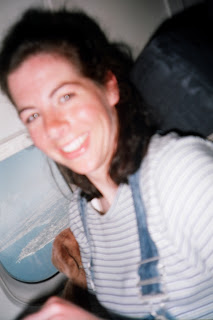 Here he is on the plane w/ one of the teachers
on the way home from Mexico.

Oh yes, he's quite the traveller. He really enjoyed going camping, but as he got older he preferred to stay in the trailer most of the time as he was worried about getting dirty. In college, he took his duties as guard dog quite seriously & rarely left the dorm. Getting married was a hard thing for him to take. It was mandated that Ralph had to give up his bed, for a few years he sat on the dresser, but as we moved more & more he chose to shut us out. I think he figured that if he wasn't allowed to sightsee, he might as well stay at home, so he never made the trip to Europe, choosing instead to hibernate for a few years. He finally made a reappearance once we moved to PEI. He really likes it here, but upon meeting the children, has chosen a high place so as not to inflame his arthritis. He did agree to a quick photoshoot: 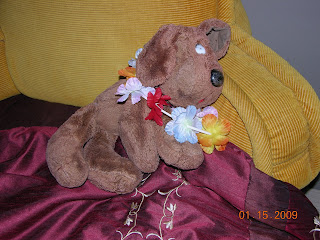 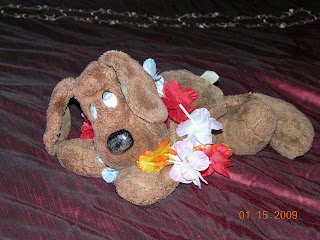 He was quite tired by the end of it all.

What's was your favourite childhood toy? Do you still have it?
Written by Sherilyn -Dominee Huisvrouw at 17:00:00

Email ThisBlogThis!Share to TwitterShare to FacebookShare to Pinterest
Labels: About me, Birthdays, Flashback, toys