We were driving in the car last week, & Asher & Chancery were arguing quite heatedly about something.  I turned the radio off so I could figure out what was causing such trouble, since they weren’t fighting over a toy. 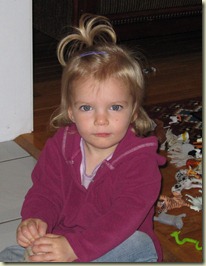 So I turned around to see what they were talking about…

Apparently Chancery was quite upset about her hair being compared to a water fountain, but in Asher’s defence, I do think he was right.

Written by Sherilyn -Dominee Huisvrouw at 09:11:00