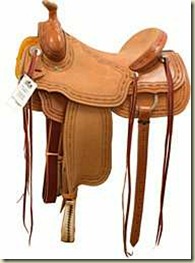 When we lived in Alberta, I worked at a Western Shop.  We sold everything from saddles & tack, to clothing & furniture.  A huge part of the business was conducted through mail-order, & I worked in that department.  My job involved taking orders over the phone, going through the store & collecting the various items, packing the orders & shipping them out.  I got really good at knowing what would fit in each box, & approximately how much each package would cost to ship with each various company. 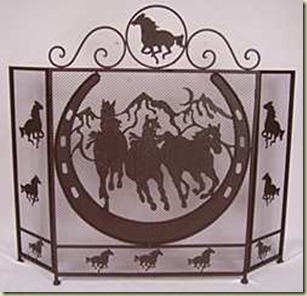 We had 3 methods of delivery, Canada Post (which was generally slower & a bit pricey), Courier (super fast, but also pricey), or Greyhound (pretty cheap, depending where you lived, it could take as little as 1-2 days).  Most people who ordered chose to have their items shipped with Greyhound, which was fine with us.  They had a flat rate for small items, so it was easy to know what to charge the customer, & the people were really nice who ran the local depot.

After working at the store for a few months, my supervisor realized that in our contract with Greyhound, the local depot was supposed to come & pick up our parcels daily.  When we talked to the people there, they said that they didn’t actually have the people available to do that.  There was generally only one person in the depot at a time.

After a lot of negotiation, it was decided that they could pick up our parcels at 1:00pm everyday, they’d just have to have an employee come over just at the shift change.  It was a nice change to not have to stop what we were doing twice a day to deliver our parcels to the depot, but there was a 10am bus that we were missing every morning due to their pick-up availability.  So, I kept bringing the parcels for the morning bus, & sometimes I’d bring another load for the 3:30pm bus.  Quite often we’d end up calling the depot to tell them we didn’t have anything to pick up at 1:00, since I had already brought everything for the morning bus.  But by 3:30 we’d have another load, so off I’d go.

As the summer wore on, the lure of the drinks cooler at the depot got more & more tempting.  I never carried cash at that time, since debit cards were accepted everywhere, it was never really a problem, but there was a sign on the register which read, “No credit/debit for transactions under $10.”  So, I resisted for awhile, but one hot day, I HAD to have a lemonade, so I took one out of the cooler, walked over to the register & asked, “I know the sign says it’s not allowed, but could you make an exception, just this once?”

The cashier (who also owned the depot) replied, “Well, it would actually cost me less to GIVE you the lemonade than it would to ring it through, so you can have it.”

A few days later, I remembered to bring cash, & after unloading my truck I grabbed a lemonade & went to the register.  The cashier told me, “Just take it, in fact you might as well just take one everyday since you’re making it easier on us by bringing everything here.”

And that is how I got paid in lemonade, for delivering western tack to the bus depot.

Written by Sherilyn -Dominee Huisvrouw at 09:31:00