A few days ago Chad was scheduled to go to a meeting over dinnertime, so in his absence, the kids & I were going to enjoy some ramen noodles (Which aren't Chad's favourite).  We had some guests give us a large box of Korean noodles, so we had decided to have them instead of our regular kind.

Chad's meeting got cancelled, & he was not really looking forward to a dinner of ramen noodles, but that's what was on the menu.  We sat down for dinner, prayed, & took a bite, to discover that our lips were burning!  The ramen was super SPICY!

Now, Chad loves spicy food, but he rarely gets it at home because the rest of us are all babies, & don't like things very spicy.  Chad was thrilled to get to get an entire pot all to himself! 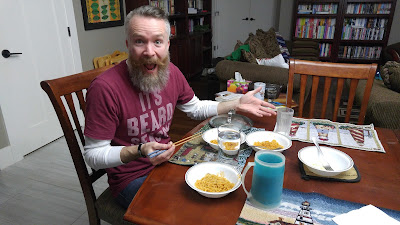 But the kids weren't impressed at all... 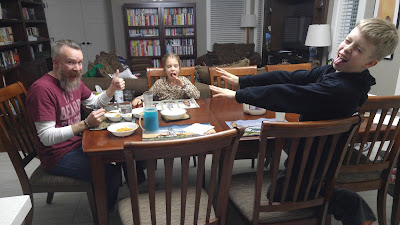 instead we had sandwiches.
Written by Sherilyn -Dominee Huisvrouw at 14:31:00